The drive up to Malibu on Pacific Coast Highway is one of the best ways to relax. The only thing between you and the ocean are sandy beaches, boulders, or homes hugging the shoreline. Heavy traffic is simply an opportunity to slow down, view the water and let the scent of the sea wash over you. By the time you reach Malibu Pier, you’ve slowed to the rhythm of the waves and are ready to appreciate the stop right next door – historic Adamson House.

My recent visit to the Adamson House opened the door to layer upon layer of intriguing Malibu history. The enchanted site, where Malibu Creek meets the Pacific Ocean, was once home to the Chumash Indians, who lived there until the late 18th century. A welcome tiled sign greets you at the entrance, followed by stone paths gently winding its way through the immaculate grounds and colorful gardens, gracefully leading you toward the house.

The front courtyard opens up to a stunning and impressive sea of flagstone leading to the Adamson House and Malibu Lagoon Museum. Adjacent to the house, the Malibu Lagoon Museum (formerly the Adamson’s five-car garage) allows visitors to walk through the history of the area, and register for one of their highly recommended, delightful docent-led tours.

Our guide first led us through the Museum on an enchanted journey from the early Chumash Indian era through the Spanish California culture.  We relived the genteel and romantic ranching days of the famed Rindge and Adamson families, and learned about dramatic episodes in Malibu’s rich history: the Malibu Railroad; the 50-room Castle on the Hill; the 17-year legal battle over a Malibu highway; the Malibu movie colony; the Malibu Dam, the well-known Malibu Potteries, and much more. 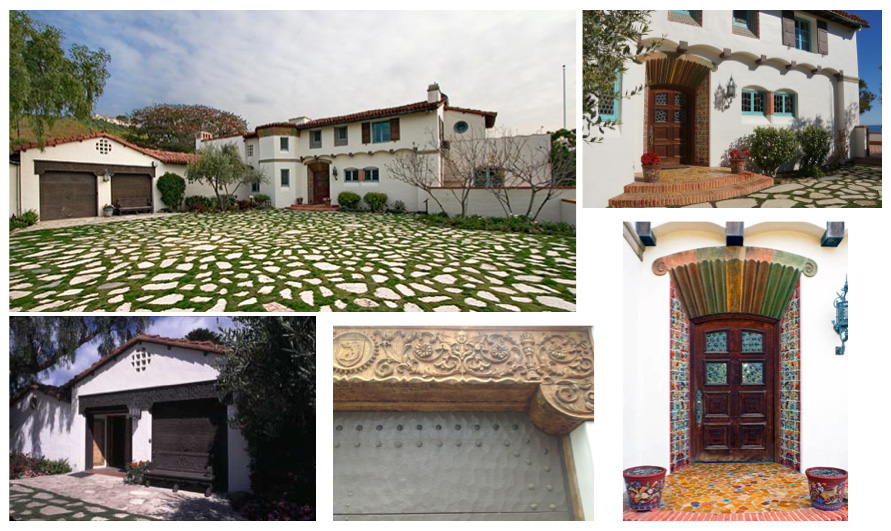 Once outside, our docent highlighted the Adamson House’s intriguing history and splendid architectural details… Built in 1930 for the Adamsons on 13 rolling acres that face famed Surfrider Beach, this Spanish Colonial Revival style house was designed by popular architect of the time, Stiles Clement, and was the first real beach house on this stretch of coast. The land was a gift from May Knight Rindge, the matriarch of Malibu, to her daughter, Rhoda Adamson.  Daughter and son-in-law of Frederick H. and May K. Rindge were the last owners of the Malibu Spanish Land Grant. For seven years the Adamson Family spent their summers in the home until 1937 when they moved in permanently. Mrs. Adamson continued to reside there after her husband’s death until she passed in 1962.

We were guided through the impressive front entrance, into a masterful display of dazzling decorative tiles, one-of-a-kind craftsmanship including hand-carved doors, hand-painted frescoes, fireplaces in several interior and outdoor patio rooms, hand-painted molded ceilings, lead-framed bottle glass windows, and wrought-iron filigrees fitting over the windows like intricate jewelry. The Persian rug made entirely of 674 tiles, is considered to be the finest ceramic in the house.

The main floor is dominated by a large living room with windows on three sides. The room is still furnished, as it was when the Adamsons lived there, including the large radio on which the family received news of the attack on Pearl Harbor.

Other rooms on the main floor include a guest bedroom with a bathroom that is tiled literally from floor to ceiling, a dining room with an old convent table overlooking the ocean, a kitchen with an early version of a dishwasher and a colorful tiled clock, and the main entrance with its imposing wood door and tiled entrance table.

There are four bedrooms and a small kitchenette upstairs. The master bedroom has a large tiled bathroom. Next to the master bedroom is the one designed for Adamson’s son; its bathroom has detailed tiles depicting ships and nautical scenes. The girls’ bedroom in the center facing the ocean has a tremendous view of the ocean and coast.

These three bedrooms open onto a large upstairs patio with the home’s most spectacular panoramic view of the ocean, the Malibu lagoon and the coast in both directions. The fourth bedroom upstairs is at the eastern end of the second floor and looks out onto a large Dombeya tree that blooms with spectacular bright red flowers in the spring.

Our tour continued outside, where flagstone pathways weave their way through beautiful landscape adorned with well-manicured trees, native shrubs, and flowers of just about every variety and hue. There are several sparkling fountains on the property. The colorfully tiled Neptune Fountain, Peacock Fountain and Star Fountain are among the home’s most photographed examples of tile work.

Nearby, the bathhouse and swimming pool are also covered with Malibu tile, and the dressing rooms have tiled showers with decorative motifs. On your way back to the house, you may be fortunate to get a glimpse of some of the 200 species of birds that stop each year during their annual migrations at the adjacent Malibu bird sanctuary. Just around the corner, our docent pointed out the elaborately tiled outdoor tub used by the Adamsons to bathe their dogs.

Whether you live in Los Angeles or plan a visit, the Adamson House is a sensational part of a delightful day trip to Malibu!  To learn more, please visit: Adamson House